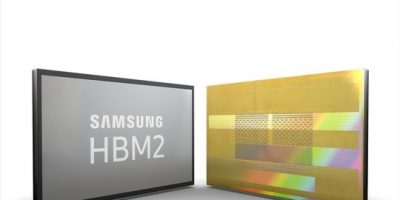 Samsung Electronics has announced the High Bandwidth Memory (HBM) -2, the Aquabolt and claims that it has the highest DRAM performance levels, for use in next-generation supercomputers, artificial intelligence and graphics systems.

Mass production has start for the second generation, 8Gbyte HBM. The Aquabolt is claimed to have the fastest data transmission speed on the market today, delivering 2.4Gbit per second data transfer speed per pin. This, says Samsung, should

Samsung has applied new technologies related to through silicon via (TSV) design and thermal control for Aquabolt. A single 8GbByte HBM-2 package consists of eight 8Gbit HBM-2 dies, which are vertically interconnected using over 5,000 TSVs per die. While using so many TSVs can cause collateral clock skew, Samsung reports that it has minimised the skew to a modest level and “significantly enhanced chip performance in the process”.

An increase in the number of thermal bumps between the HBM-2 dies enables stronger thermal control in each package. The new HBM2 includes an additional protective layer at the bottom, which increases the package’s overall physical strength.