SBC for military applications can be integrated into SOSA systems 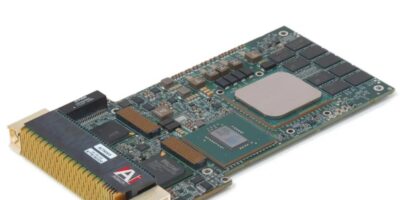 Aligned with the Open Group’s Sensor Open Systems Architecture (SOSA) technical standard, the U-C8770 3U VPX SBC has been released by Aitech. It is the first SBC that is both fully aligned with the SOSA technical standard, claims the company, and offers advanced data breach and threat protection through Aitech’s proprietary AiSecure cybersecurity infrastructure. It also has the largest RAM and storage of any SBC in its class, says the company. There is also a large onboard FPGA.

Judy Cerenzia, vice president of forum operations at The Open Group, said the SBC will help build momentum for the upcoming release of the SOSA Technical Standard, which is scheduled for later this year. “The continued efforts of SOSA Consortium member companies, like Aitech, to participate in and celebrate these accomplishments strengthens the foundation on which our open standards ecosystem relies,” she added.

The new U-C8770 3U VPX SBC supports both PCIe 4x and 40GE data plane options for fast transport of large amounts of uncompressed video and sensor data. It is an adaptation of Aitech’s rugged C877 SBC, and retains the same key technical features, making it suitable for I/O-intensive data processing applications in the military and aerospace markets, such as radar, signal intelligence (SigInt), electronic warfare (EW) and sensor signal processing.

With 40 years of experience, Aitech claims to be the oldest and largest independent global high-tech manufacturer providing reliable, rugged embedded systems for the harshest, most unforgiving environments in military, defence, aerospace and space applications. Its products in artificial intelligence (AI) autonomous, cybersecurity and the digital backbone, enable the world’s most cutting-edge disruptors to expand their most revolutionary explorations based on multiple open standard architectures in which Aitech participates, for example, SOSA, FACE, VPX, CompactPCI.

The company produces standard COTS products like SBCs, I/O, memory, and graphics boards, PMC/XMCs and sub-system enclosures, as well as custom integrated systems to take on the most challenging projects in the harshest environments and succeed.

The Open Group is a global consortium that enables the achievement of business objectives through technology standards. Its diverse membership of more than 850 organizations includes customers, systems and solutions suppliers, tool vendors, integrators, academics, and consultants across multiple industries.

The Open Group SOSA Consortium aims to create a common framework for transitioning sensor systems to an open systems architecture, based on key interfaces and open standards established by industry-government consensus.