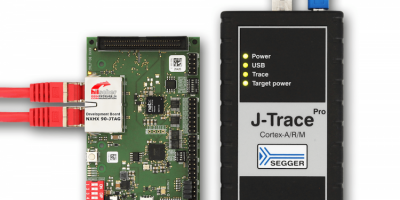 Live code profiling and coverage can be exploited when using the J-Trace-Pro trace probe for the Hilscher multi-protocol SoC netX90. Segger says that software engineers working with the netX90 can also enjoy not only the J-Link’s high download speeds and breakpoints in flash memory.

The complexity of SoCs make system verification even more important, says Segger, citing Hilscher’s netX90 as an example as this complexity. The J-Trace Pro can log the program flow over long periods of time to catch “even the most elusive bugs,” says the company.

Segger Microcontroller has over 25 years of experience in embedded computer systems, producing middleware and a full set of hardware tools (for development and production) and software tools.

Segger provides an RTOS plus communication and security software and professional software libraries and tools for embedded system development, designed for simple usage and optimised for resource-constrained embedded systems. The company also supports the entire development process, with tools and middleware components.

The company was founded by Rolf Segger in 1992, is privately held and has over 50 employees, with engineers headquartered in Germany. There is also an office in Boston, USA and branch operations in the UK and Silicon Valley, USA. There are also distributors on most continents, says the company.

Segger software is not covered by an open-source or required-attribution license and can be integrated in any commercial or proprietary product, without the obligation to disclose the combined source.