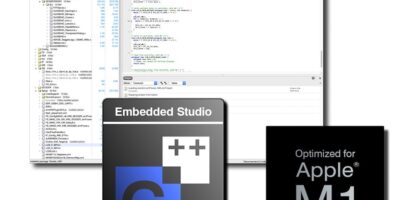 To optimise the speed and performance potential of a natively compiled application, Segger has created a build of Embedded Studio for M1. There are now two macOS packages available, one for the Intel x86-64 and one for the Apple M1.

“The Embedded Studio build for the Apple M1 is truly cutting-edge,” says Ivo Geilenbrügge, Segger’s managing director. “This is the first commercial embedded system IDE optimised for the M1,” he confirmed.

Segger Microcontroller has over 28 years of experience in embedded computer systems, producing software libraries, and offering a full set of hardware tools (for development and production) and software tools.

Segger provides an RTOS and a complete spectrum of software libraries including communication, security, data compression and storage, user interface software and more.

Segger’s professional software libraries and tools for embedded system development are designed for resource-constrained embedded systems. Sesoftware is not covered by an open-source or required-attribution license and can be integrated in any commercial or proprietary product, without the obligation to disclose the combined source

Segger was founded by Rolf Segger in 1992. The privately held company has a US office in the Boston area and branch operations in Silicon Valley and the UK, with distributors on most continents.