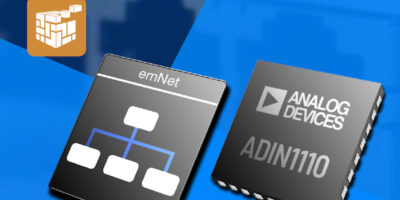 The combination of emNet – which is part of Segger’s emPower operating system (OS). The dual IPv4/IPv6 TCP/IP stack for embedded systems is a complete software package designed to meet all networking demands including, and especially, the IoT, Segger adds.

For an Ethernet application with a low power host processor at maximum transmission rate, the emNet IP stack has minimal memory requirements and is defined by simple integration without configuration effort, says Segger. The ADIN1110 MAC-PHY simplifies connectivity to any low-power processor through an SPI which increases options for processor selection.

The emNet and ADIN1110 combination allows low power microcontrollers with minimal flash memory and without their own MAC to be selected as processors. The emNet IP stack supports external MACs, such as the ADIN1110, enabling any standard microcontroller to attach to Ethernet. The IP is also efficient in terms of flash, RAM, and packet processing speed, says Segger, so that even small, low frequency microcontrollers maintain network performance. The low power consumption means these processors combined with the ADIN1110 can also be safely operated in explosive environments, adds Segger.

The emNet and ADIN1110 combination also supports the new Ethernet-APL standard and complies to IEEE802.3cg for 10BASE-T1L Technology. This enables both data and power over 1 km of single twisted pair cables at 10 Mbits per second full-duplex. This provides access to new data and insights from devices located in remote and hazardous areas, supporting real time configuration, says Segger.

Ethernet-APL-based sensors and actuators are currently being developed for the process industry. “The joint effort by Segger and Analog Devices enables customers to quickly integrate a TCP/IP-based solution in their devices,” said Stefan Lueder, project manager Ethernet-APL integration at Siemens.

The ADIN1110 and emNet combination provides “an extremely fast path to market for low power, single pair Ethernet communications solution . . ideal for sensor or actuator nodes for many use cases including those in hazardous areas,” said Mick McCarthy, director of industrial Ethernet technology at Analog Devices.