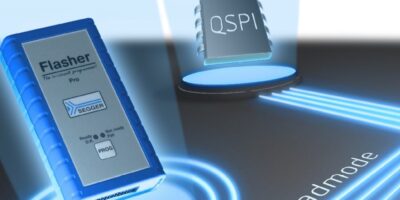 Quad mode programming for QSPI flashes has been added to Segger’s universal flash programmer. According to the company, this maximises programming speed for production environments.

Flasher PRO ensures that the time gained using four-pin transfer contributes to increased productivity. Operating in either PC-based or stand-alone mode, the Flasher PRO reaches the theoretical minimum programming time of the QSPI device itself.

“With Flasher PRO, the hardware’s the limit,” said Ivo Geilenbrügge, managing director of Segger. “The only way to make programming even faster was to add support for quad mode,” he explained.

QSPI Flashes are used in embedded systems for program and data storage, even combined on the same device. Capacities continue to increase and are now up to 128Mbyte, making programming speed even more important, especially in mass production, says Segger.

Flasher PRO is easy to set up and operate using the software which is available for Windows, macOS, Linux for Intel and Linux for Arm processors, says Segger. It can be operated as a standalone programmer, controlled from a PC, or controlled remotely. In larger production environments, it usually partners with other Flasher PROs to program multiple devices simultaneously.

Mass production environments, automated test equipment (ATE) and other production control units can access the Flasher for programming. This may include unique serial numbers and patch data. Small series runs can be automatically programmed by connecting a standard PC to the Flasher or even manually by the simple push of a button on the Flasher.