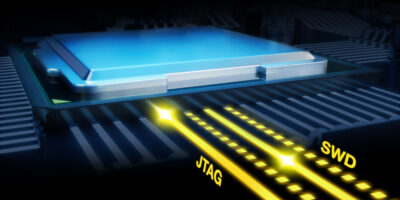 JTAG boundary scan from XJTAG now includes support for devices with an Arm Cortex core. The XJTAG 3.11 is the latest serial wire debug (SWD) support with user-defined libraries and a new clock generator.

Support for the SWD protocol is via any two pins of the XJLink2 interface. As well as being used to program a device’s internal memory, this interface allows an SWD-device to be controlled directly during a board test. For example, it can provide a way to test a peripheral such as an ADC. It can also be used to program connected memories.

XJTAG recommends bringing out a processor’s JTAG signals for good test coverage, but if this cannot be done for some reason, XJTAG 3.11 provides a way to test the device’s connections by using SWD to control its GPIO pins.

Devices that multiplex SWD on their JTAG pins are supported by an additional function that automates switching between the two modes. In this way, engineers can increase the number of ICs available with an SWD interface.

The 3.11 release also introduces an application that allows engineers to create and manage their own library of XJEase device files and circuit code files. This library can be distributed and maintained across an organisation to help drive consistency between teams, reduce the risk of duplicated effort, and minimise the time taken to maintain projects. It can be added to XJDeveloper’s list of libraries to be used when categorising devices or adding circuit code files to a project.

Engineers looking for a way to prevent a watchdog timer from resetting the board during testing, or who need a simple clock input, will benefit from XJLink2’s new oscillator output supplied with XJTAG 3.11. It brings convenience and cost savings, says XJTAG, in many instances removing the need for a separate signal generator. This oscillator is adjustable in 10kHz steps from 10kHz to 166MHz and has a high-impedance output state when switched off. It is easy to control during a test using XJEase and runs without continuous software interaction, making it suitable for testing a board that requires a constant input. It is available on all XJLink2-based hardware, including USB, PXI and Quad versions.

XJTAG has responded to several engineering requests by adding support for importing bill of materials (BoM) files in Excel format (.xls and .xlsx), including multi-tab files.

When using multiple log files, engineers no longer need to open every file to find the ones they want. Now, the Log File Viewer in XJTAG 3.11 enables users to filter and search a collection of log files based on their content. Users can filter log files to identify those where a specific test failed, or those generated at a particular time or from a specific XJPack or project version. This speeds up the process of identifying trends and debugging problems. Other additions to the Log File Viewer include the ability to preview a list of tests and results before opening the file, easier navigation through the file because the relevant section is highlighted when a test is selected in the navigation pane, and the addition of a “most recently used” list of folders.

In the case of debugging problems with dynamic JTAG chains, it is now easier to switch profiles on XJDeveloper’s Analyser, Debug Connection Test, and Pin Mapping screens. Users can now switch freely between profiles, instead of needing to change the project’s default setting.