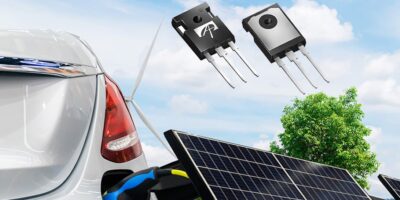 1,200V SiC MOSFETs released by Alpha and Omega Semiconductor are specifically designed for the industrial and automotive markets. The technology will enable customers to achieve higher levels of efficiency and power density compared to existing silicon solutions, says Alpha and Omega.

They are optimised for minimising both AC and DC power losses through a low gate resistance (RG) design combined with the low increase in on-resistance (RDSON) over temperature, says the company. The aSiC technology is claimed to achieve the highest efficiencies across a wide range of application switching frequencies and temperatures.  This higher efficiency can result in significantly reduced system costs and total bill of materials for industrial applications, including solar inverters, uninterruptible power supplies and EV inverter and charging systems.

The first product release is the AOK065V120X2, a 1200V 65mOhm SiC MOSFET available in a TO-247-3L package.  For ease of use, the AOK065V120X2 is designed to be driven with a -5V/+15V gate drive, allowing the broadest compatibility with existing high voltage IGBT and SiC gate drivers, says the company.  Operation with a unipolar drive is also possible with optimized system design.  Additional benefits of the aSiC platform is a robust unclamped inductive switching (UIS) capability, enhanced short circuit performance and a maximum operating temperature of 175 degrees C.

Alpha and Omega expects to expand the aSiC MOSFET portfolio further later this year to include a broader range of on-resistance and additional package options with full AEC-Q101 qualification.

Alpha and Omega Semiconductor is a designer, developer and supplier of power semiconductors, including a wide portfolio of power MOSFET, IGBT, IPM, HVIC, GaN/SiC, power IC and digital power products.

It has developed extensive intellectual property and technical and differentiates itself by integrating its discrete and IC semiconductor process technology, product design, and advanced packaging expertise to develop high-performance power management solutions.