SIM cards can be tested in vehicle’s telematics control unit 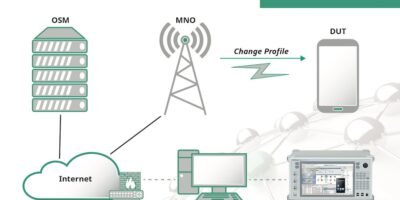 Anritsu has partnered with Thales and European car manufacturer, Groupe PSA, (Peugeot, Citroën, DS, Opel and Vauxhall) to test vehicles with embedded SIM cards both in a laboratory environment and in a live mobile network. It also enables rapid switching between the two.

The test system is based on Anritsu’s MD8475x base station simulator platform and Thales’ On-Demand Subscription Manager (OSM). It allows Groupe PSA to conduct a full laboratory test of vehicle with the eSIM integrated into a car’s telematics control unit (TCU).

The eSIM in the car has a profile allowing it to connect to the mobile operator’s network providing connectivity to PSA group vehicles. Typically, only one environment, live or laboratory, can be used in the validation and in the verification test of the vehicle. The collaborative solution, however, ensures the eSIM can be switched easily to the laboratory profile, allowing the test team to control all aspects of the simulated network environment as well as all measurements. This is particularly important in the automotive industry, where safety is a priority, says Anritsu.

Using the Thales OSM, the profiles can be switched over the air at the press of a button. During integration, the test system can change from the live to the test profile and back again. For example, initially connected to the live mobile network operator (MNO), the eSIM switched connectivity to the test radio network from the base station simulator.

One of the benefits of this system is the ease of swapping profiles; previously this would have involved physically desoldering the embedded SIM and replacing with another. This causes delays and also risks damage, says Anritsu. An alternative is to use commands in the TCU, but this can be complicated due to the use of proprietary software which may lead to unwanted changes in TCU firmware.

As well as the automotive industry, the solution can be used in any applications that use embedded SIMs, such as in the IoT.