Single chip physical layer interface devices are based on CoaXPress 2.0 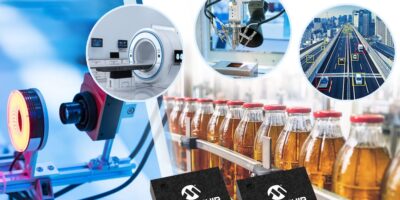 Accelerating machine vision image capture while also contributing to the simplifying of system design and deployment, Microchip Technology’s EQCO125X40 family of CoaXPress devices is believed to be the first to implement the CXP 2.0 standard.

The single chip, physical layer interface devices can be used to create capture cards and cameras supporting the new specifications.  The 12.5Gbits per second CoaXPress 2.0 interface standard was ratified last year. It addresses machine-vision image-capture to accelerate production-line throughput. Microchip says it has taken the next step, after ratification, towards realising the full potential of CoaXPress (CXP) on the factory floor. These single chip, physical layer interface devices include features that streamline machine vision system design, maximise transmission speed and simplify deployment in high-volume industrial inspection and imaging applications.

The company has worked with the Japan Industrial Imaging Association (JIIA) standards organisation and lead customers to optimise the EQCO125X40 family of CoaXPress devices and to fully exploit the specification’s benefits on the factory floor.

Microchip’s EQCO125X40 family of CoaXPress devices is claimed to be the first to implement the CXP 2.0 standard, starting from a new backwards-compatible design based on the specification. They have an integrated clock data recovery (CDR) at all speed levels and a camera-side clock to support the demands of real-world environments.

The family also increases design tolerances and flexibility by seamlessly locking on all frequencies at any speed, from CXP-1 to CXP-12, and eliminates the need for multiple channels by supporting 12.5Gbits per second of bandwidth over a single cable. Broader cabling options ensure systems can be installed where needed and the integrated CDR improves jitter performance for the signal sent from the camera to the capture card.

The on-camera low-frequency clock recovery eliminates the need to program a separate clock in the FPGA. The integrated link signal integrity testing enables the system to perform real-time checks of cable link integrity before and during operations.

They also enable pre-setup and real-time cable link quality tests to be performed, and also have the option to scale up to 50Gbits per second over multiple cables.

According to Microchip, the CXP devices enable manufacturers to get the same throughput from two ports on cameras and frame grabbers as they previously could with four. The devices can be used to retrieve a real-time low-frequency clock at the camera side, which provides more accurate signal timing. The manufacturers can also use it as a cable repeater, further extending the distances over which the cameras can be linked. Their low power consumption makes them suitable for developing smaller, better-performing image-capture solutions that are simpler and less costly to design.

The CoaXPress 2.0 family is also suitable for use in traffic monitoring, surveillance and security, medical inspection systems and embedded vision solutions.

The Microchip CoaXPress 2.0 family includes a transmitter-only camera-side device and three single-chip transceiver options. Each is packaged in a 16-pin quad-flat no-leads package and is fully backwards-compatible with Microchip’s CoaXPress 1.1 family of devices.