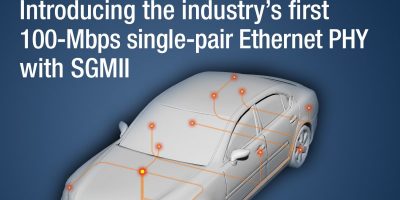 Offering the opportunity to include more capability and intelligence into automotive network designs, the 100Mbit per second single-pair Ethernet physical layer (PHY) transceiver has been announced by Texas Instruments (TI).

In addition to requiring fewer external components, the DP83TC811S-Q1 is supplied in a 6.0 x 6.0mm wettable flank package. This can reduce solution size by 50 per cent, claims TI. The transistor also complies with the Institute of Electrical and Electronics Engineers (IEEE) 802.3bw standard and Open Alliance qualification, enabling the use of unshielded single twisted-pair copper cable, which reduces overall cable weight and cost.

The DP83TC811S-Q1 has been developed by using one of TI’s low-power process technologies. It minimises thermal dissipation and enables components to be placed closer together. The device also includes power-saving features such as standby, disable and wake-on local area network (LAN).

The integrated diagnostic toolkit features cable diagnostics, temperature and voltage sensors, and an ESD monitor, enabling engineers to create designs that can withstand ESD and voltage events. The diagnostic features enable designers to continually monitor the integrity of the Ethernet link. Additionally, the DP83TC811S-Q1 provides up to 8.0kV of ESD protection, helping shield the device against high-voltage faults.

SGMII uses only four pins instead of 12 required for reduced gigabit media independent interface (RGMII). This contributes to reducing board size and the number of traces which, in turn, simplifies the design layout. The integrated physical medium dependent (PMD) filter, MII series terminators, PMD termination and power-supply filtering components reduce the need for external discrete circuitry to save board space for other added features.

The DP83TC811S-Q1 has a latency as low as 140 ns, allowing latency-critical systems like automotive ADAS to respond and communicate more quickly, says TI.

Designers can easily evaluate the device and its SGMII support with the DP83TC811SEVM evaluation module. Designers who need only RGMII can use the DP83TC811EVM evaluation module. Engineers can also jump-start a system design with the Automotive Stand-Alone Gateway Reference Design and the Cost-Effective In-Vehicle Infotainment System Reference Design.