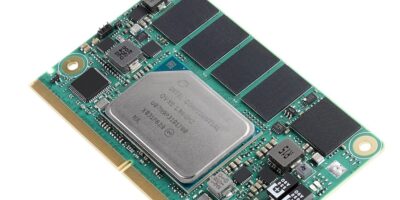 Based on the latest 10nm Intel Elkhart Lake processor, the SOM-2532 is a SMARC 2.1 system on module (SoM) by Advantech. It is intended for real time automation control, safety critical applications and transportation.

The SOM-2532 supports on-board LPDDR4 3200Mt/s up to 16Gbyte with in-band error code correction (IBECC). (The soldered LPDDR4 memory features an anti-vibration design.) Non-volatile memory speeds are improved, compared to eMMC 5.1, says Advantech; the SOM-2532 with UFS2.1 implementation can achieve a 40 per cent increase in sequential read and a 20 per cent increase in sequential write speeds.

CAN-FD enables a maximum 8Mbits per second data transfer rate and would reach 10x the speed of the payload transmission, which is vital in data-intensive applications, continued Advantech. Low latency and also classic CAN devices are supported in many cases.

The SOM-2532 has a wide operating temperature of -40 to +85 degrees. Its functional safety design reduces dangers caused by machine malfunction, the company says, making the SOM-2532 a safe option for portable devices and industrial applications.