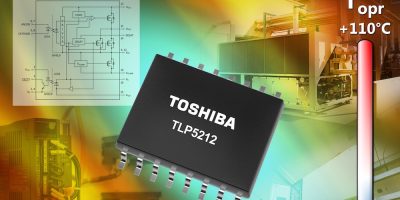 A ±2.5A output smart gate driver photocoupler launched by Toshiba Electronics Europe is able to control IGBTs and MOSFETs while protecting power devices from over-current incidents. The TLP5212 can be used in a range of applications including inverters, AC servo drives, photovoltaic (PV) inverters and uninterruptible power supplies (UPS).

It is designed with a totem pole output with two N-channel MOSFETs, enabling it to sink or source up to ±2.5A and ensure compatibility with specifications widely used in industrial equipment. The design also includes desaturation detection, an active Miller clamp, under-voltage lockout and fault output to protect operation. According to Toshiba, this reduces system costs for fault detection and protection and additionally saves space and reduces design effort. When the Toshiba’s own infrared LED is incorporated, the TLP5212 can be used in severe thermal environments.

The photocoupler is housed in a small SO16L package, measuring 10.3 x 10.0 x 2.3mm. The compact package enables it to be used where space is limited. Despite this, minimum creepage distance is 8mm, reported Toshiba, allowing it to be used for applications requiring high levels of safety isolation and insulation (BVs = 5000Vrms).

The TLP5212 requires a signal on the input side to resume from protection. Toshiba is also developing the TLP5222, an accompanying photocoupler which resumes automatically after a specified time. The company will announce details of its release nearer the time. Mass production of the TLP5212, however, has begun.