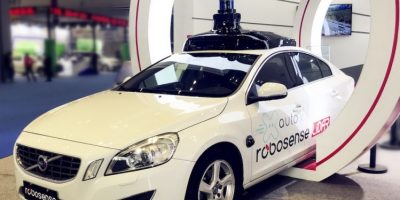 At the Shanghai Auto Show, RoboSense announced the RS-Bpearl, a super wide angle blind-spot lidar and the RS-Ruby, a super high-resolution lidar for the sensor system.

Scheduled for mass production in 2021, the RoboSense RS-Lidar-M1 for OEMs will be a smart sensor. RoboSense and Horizon Robotics will build customised chips for the lidar environment perception algorithm, called RS-Lidar-Algorithms. These algorithms will be integrated into the IC and embedded in the lidar hardware. The RS-Lidar-M1 will provide instantaneous 3D point cloud data interpretation and output target level environment perception results in real time to autonomous vehicles.

The RS-Bpearl has a wide FoV of 360 x 90 degrees, within the detection range of 30m (10 per cent) for a 100mm blind spot. The compact size of the sensor makes it easy to be applied to the side of the vehicle body to detect the vehicle’s surroundings, including blind spots. The RS-Bpearl’s modular design also dramatically reduces cost while adding the ability for customisation, says RoboSense.

Robot taxis need lidar with a higher vertical resolution to achieve a longer detection range, leading RoboSense to develop the 128 beam RS-Ruby lidar. It has three times higher 0.1 degree resolution and a three times longer detection range, compared with the previous version, RS-Lidar-32. One RS-Ruby Lidar is the core sensor on top of the vehicle to cover the 360 degree perception and two are located on the vehicle’s sides to detect blind spots.