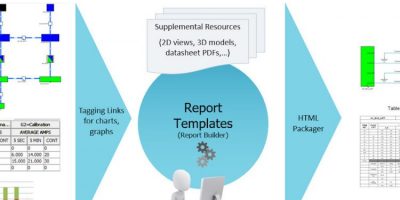 Software to simplify aircraft electrical design compliance and certification has been introduced by Mentor, a Siemens business. The Capital Load Analyzer software is designed for the design of electrical flight control systems and in-flight entertainment systems which increasing require more power, have more electrical content, and have higher compliance risk due to increased complexity, reports Mentor.

Using a digital twin, the Capital Load Analyzer is believed to be the industry’s first electrical systems technology that leverages automation and digital data continuity to facilitate regulatory compliance.

The electrical digital twin is generated from the overall power system and subsystems design, to predict the aircraft’s electrical power demand and is an accurate, up-to-date version of the electrical system as it evolves during the development process. The electrical digital twin provides an automated view of the entire power system, enabling engineers to design for compliance from the beginning of the project, rather than trying to address problems that later stages of the design cycle may highlight. Analysis and simulation are performed using primary design data and rules-based checking and analysis helps enable accurate and complete verification for aircraft power system efficiency for each flight phase – even under load shedding for emergency conditions, says Mentor.

Capital Load Analyzer automatically extracts all electrical load analysis data into the user’s own reporting template for report generation. Data is pulled directly from the digital twin so the user can see the impact of design changes at any time and at any stage of the design process. The ability to quickly generate real-time reports enables users to monitor design tasks and identify potential issues early in the design process, thereby mitigating program risk. The Capital Load Analyzer product reports compliance analysis results for each design configuration and variant.

Siemens is further extending the Capital product line to include two additional technologies. A new wire derating product optimises the aircraft’s wire sizes to reduce weight while maintaining integrity against hazards, such as over-heating, and a 3D signal separation tool evaluates the electrical design against safety-critical design considerations, such as power routing requirements and harness spacing for redundant systems. These products will ship in the second half of 2019, says Siemens.