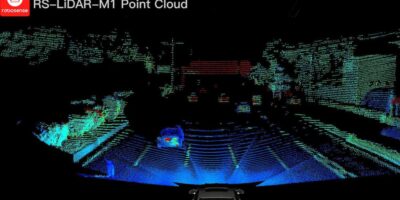 M1 filters laser pulses from other lidars to prevent crosstalk. The SOP version is claimed to be the world’s thinnest automotive lidar, measuring 108mm in depth, 110mm wide and 45mm high for ease of integration into the vehicle body.

RoboSense has adopted VDA6.3 as the basis of project management and control, implemented IATF16949 quality management system and the ISO26262 standard, and has integrated ISO16750 and other automotive-grade reliability specifications, to carry out a series of verification tests on M1. Tests include random mechanical vibration, mechanical shock, splash water, stone impact, high and low temperature storage and operation, solar radiation, EMC, chemical corrosion and salt spray. The cumulative test time of all M1 test samples has exceeded 300,000 hours, reports the company. The longest-running prototype has been in continuous operation for more than 700 days, and the total road test mileage has exceeded 200,000km.