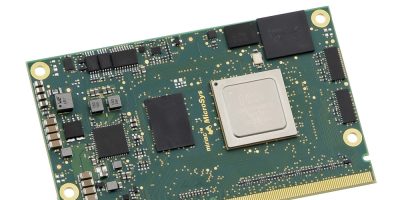 There are also eight Arm Cortex-A53 cores instead of four and four Arm Cortex-M7 dual-core lockstep pairs instead of three. OEMs using this miriac SoM benefit from more processor bandwidth for safety-critical applications but also from the SoM’s inherent instant access to prototyping and extended connectivity as well as comprehensive software support and safety documentations mandatory for certifications, said MicroSys.

The NXP S32G vehicle network processor is targeted for ASIL D safety applications in OEM and Tier-1 automotive applications. MicroSys Electronics extends its application areas to SIL certifications for any market where functional safety standards analogue to IEC 61508 are required, including railway technology (EN 50155), aviation (DO-160), stationary and mobile machinery (ISO 13849), as well as manufacturing robots (ISO 10218), control systems (IEC 62061), and drive systems (IEC 61800‑5‑2). Approvals in the aviation context (DO-254/DO-160) can be supported with manufacturer documentation.

The eight Arm Cortex-A53 cores with Arm Neon technology are organised in two clusters for applications and services. For real-time tasks, the S32G3 has also four dual core lockstep Arm Cortex-M7 pairs for which MicroSys offers support for dedicated FreeRTOS implementations beside NXP’s standard automotive support. Clustered and operated in lockstep mode, the set of heterogenous cores of the S32G3 can support ASIL-D applications or any other functional safety standard comparable to IEC 61508.

The SoM also integrates 4Gbyte of soldered LPDDR4 RAM at 3200 Mtransfers per seocnd, up to 32Gbyte eMMC non-volatile memory and 64Mbyte QuadSPI flash. External SD card storage can be multiplexed with the on-board eMMC.

For trace and debug tasks, the SoM supports Aurora and JTAG interfaces. MicroSys also offers a board support package including bootloader configuration and all required Linux drivers.