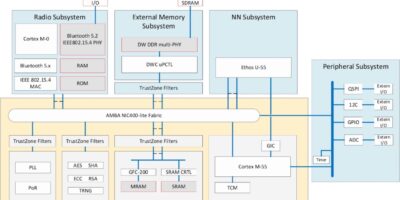 High performance IoT solutions for AI at the edge can now be created up to 30 per cent faster, says Sondrel, using the SFA 100 IP reference platform to simplify the creation of battery-powered IoT devices.

The design has an onboard Arm CPU to locally process data gathered from its associated sensors for onward transmission via wire or wireless connection for further analysis. Security is built in using standard secure/encrypted protocols.

The IoT is based on gathering data about the nodes’ environment and the SFA 100 IP platform has been designed specifically for this as a compact, powerful, compute capability to intelligently transform data into knowledge and add intelligence, says Sondrel. Most of the design work has already been done to create this reference design so that all that is needed is the customer’s own IP and any minor customisation needed for the final ASIC. This semi-custom approach, which Sondrel calls Architecting the future, reduces risk, design costs and time to market by up to 30 per cent compared to starting from scratch, says Sondrel.

The SFA 100 provides the ability to integrate a machine learning engine onto a low cost, low power edge device and is based on the Arm Corstone-300 subsystem that ensures a very high level of security. An Arm Cortex-M55 has secure boot with cryptographic algorithm accelerators and supports TrustZone and CryptoCell for additional security for the onward processed data. There is also the Arm Ethos-U55 machine learning (ML) processor that provides a 480x uplift in ML performance, claims Sondrel. This combined processing capability enables the endpoint device to perform ‘smart’ operations such as voice activation, image classification, gesture recognition, filtering, inference or tracking, depending on the application. If more memory is required, it can be scaled up via the DRAM interface

The design has GPIO, I2C, UART and QSPI peripheral interfaces to capture sensor data, such as video, image, sound and both static and dynamic data, and a 12-bit audio DAC for voice commands. The low power requirement of the SFA 100 design enables it to operate on battery power for long periods, together with low power, wireless connectivity using either Bluetooth BT5.1-LE or ZigBee.

Founded in 2002, Sondrel is a define-and-design ASIC consultancy, complemented by its turnkey services to transform designs into tested, volume-packaged silicon chips. This single point of contact for the entire supply chain process ensures low risk and faster times to market, says the company.

Headquartered in the UK, Sondrel supports customers around the world via offices in China, India, France, Morocco and North America.