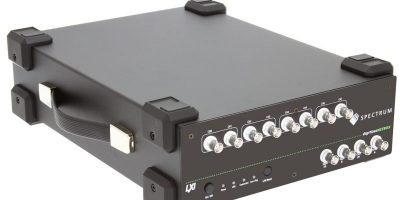 Spectrum Instrumentation has announced standalone versions of its recently launched, high precision, PCIe digitiser card. The DN2.59x digitizerNetBox series has 16-bit ADC technology to deliver 256 times more resolution than the usual eight-bit technology, says the company. The range includes models that offer four, eight and 16 channels and a choice of sampling rates up to 125Msamples per second on each channel. This provides a range of configurations for use in demanding applications such as automated testing, communications, science and ultrasound.

The DN2.59x is designed to open a simple path for anyone who needs precision multi-channel signal acquisition in one small Ethernet/LXI controlled box, says the company. Oliver Rovini, technical director of Spectrum said: “For example,  most conventional test instruments, such as digital oscilloscopes, use eight-bit ADCs with 256 levels of resolution. In contrast, the DN2.59x units all use 16-bit ADCs that provide more than 65,000 levels. This higher resolution delivers greater dynamic range and improved dynamic performance so that users can make better, more precise, measurements.” The digitizerNetBox products can be integrated with any PC, or even the company network – they are supplied with software to capture, store and analyse signals.

Controlling and accessing the data collected by the digitizerNetBox is by simply connecting it with GBit Ethernet to a host computer or anywhere on the corporate network. The platform is LXI-compliant (following Core 2011 specifications) and offers an IVI compatible interface for the IVI scope and digitiser classes. Users can write their own control program using almost any popular language including, C++, VB.NET, C#, J#, Delphi, Java and Python code. Alternatively, they can run Spectrum’s SBench 6 Professional software.

SBench 6 lets users control all the modes and settings of the hardware via a simple, interface. The software also has a host of built-in features for data analysis and documentation. These include FFT analysis, XY display, a function interpreter, parameter measurements, export into ASCII, Wave, MATLAB, comment functions (for annotating signals or displays) and even a simple report and printout function.

The DN2.59x series products also provide software selectable, single-ended and differential input modes. Each channel has its own ADC and an independent amplifier. The amplifiers have selectable input impedance (50 Ohms and one-MOhms) and calibrated gain with ranges from ±200mV to ±10V full scale. Variable gain allows input signals to be scaled so that they cover the full dynamic range of the ADC to maintain the best possible measurement accuracy. All the channels are synchronously clocked so that phase error is minimised and inter-channel measurements can be made. Large on-board memories also make it possible to acquire and store the longest and most complex of waveforms.

The units include an array of smart triggering capabilities and acquisition modes. Triggering on problem signals like glitches, spikes, bursts, or even when specific patterns occur, allows storing the recorded waveforms in the most memory efficient way possible. Transient capture, multiple (burst) recording, gated sampling, ABA sampling and data streaming (FIFO) modes are all supported.

The DN2.59x series digitizerNetBox products are available immediately and come with a five-year product warranty as standard.