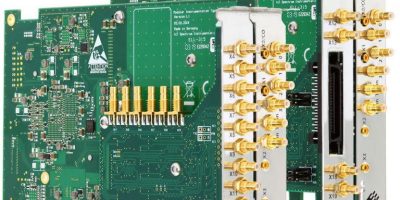 The digital option is a piggy-back module for the PCIe cards that occupies the panel of a second slot. It comes in two different versions, one with SMB connectors and one with an FX2 flat-ribbon connector. The SMB-version (M2p.xxxx-DigSMB) offers 10 connectors on the front panel, plus six more that are available internally and can be used for PC-internal cross connection or external connection via an empty slot bracket. The FX2-version (M2p.xxxx-DigFX2) guarantees compatibility with predecessor products from Spectrum and allows parallel connection of all lines with a single connector.

The modules fit on the 16-bit digitisers of the M2p.59xx series, offering 20 different PCIe-cards with one to eight channels and 20 to 125Msamples per second. They also fit on the 16-bit AWGs of the M2p.65xx series, consisting of eight PCIe-variants, also with one to eight channels and the choice of 40 or 125Msamples per second.

The module can be mounted on an M2p.5968-x4 digitiser card to operate with eight analogue channels in parallel with up to 19 synchronous digital channels and one other on the main card which is output only. Using the same module on an M2p.6568-x4 AWG-card provides eight analogue AWG channels and up to 20 synchronous digital outputs or marker outputs, explains Spectrum. Digital data is stored inside the analogue samples by reducing the resolution.