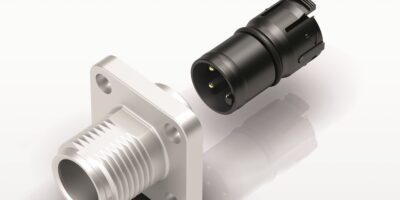 Two-piece M12 panel mount connectors from binder are equipped with square-flange housings and multi-position, lockable A-coding. As a result, says the company, they simplify secure sensor/actuator connections in factory automation and robotics.

Industrial-grade, standardised M12 circular connectors with A-coding according to DIN EN 61076-2-101 are a well-established component of sensor and actuator systems in typical factory automation and robotics applications. The coding avoids mis-mating by ensuring precise assignment of the pin and socket contacts. A-coding generally stands for applications in signal transmission with DC voltage over three to 12 pins. Partial assignment of the contacts ensures plug-in compatibility with product variants with different (lower) pin counts. Multi-position coding is advantageous if the installation has to be carried out at different angles, for example, due to the mounting conditions.

A-coded M12 signal connectors are typically used in the field and both inside and outside of the control cabinet for efficient, cost-effective sensor/actuator communication, says binder.

The square-flange variants of the 763 series consist of the metal flange housing and a contact carrier. The carrier is equipped with a lockable coding nose that can be rotated in 45 degree increments.

The 763 series M12 A signal connectors are equipped with four, five and eight pins as well as single wires or solder contacts. The single-wire version has a square housing 20 or 26mm wide. The variant with solder contacts measures 20mm. The 26mm square housing of the M12 single-wire version has the same drilling scheme as the M16 form factor, so users can switch between the design sizes without having to adapt existing housings.

The rectangular-flange M12 connectors with multi-position, lockable A-coding are specified for a maximum wire gauge of 0.25mm2 (AWG 24). In all four- and five-pin versions, the rated currents reach 4A (3A UL), 2A (1.5A UL). Rated voltages are 250V (four-pin), 60V (five-pin) and 30V (eight-pin). The corresponding rated impulse voltages are specified as 2500, 1500 and 800V, respectively. The connectors meet the density requirements combined with suitable sealing but without a defined tightening torque in accordance with protection degree IP69. The connectors are designed to operate from -40 to +85 degrees C.