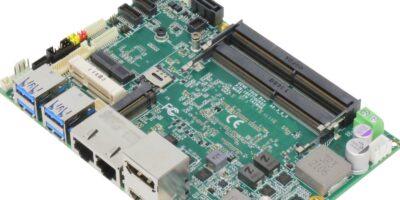 Described as a sub-compact embedded board, the GENE-TGU6 has been announced by Aaeon. It is based on 11th Generation Intel Core U processors (formerly Tiger Lake). The board is designed to power applications from AI processing and edge IoT, to digital signage and automation.

The 11th Generation Intel Core U processors deliver up to 20 per cent better performance compared to previous generations. By leveraging both thermal design and industrial CPUs, the GENE-TGU6 can support operation in tough environments with temperatures ranging from -40 to +85 degrees C (0 to 60 degrees C on standard platforms).

The GENE-TGU6 allows users and developers to leverage the Intel Iris Xe embedded graphics. It features five video outputs on board, supporting up to four simultaneous displays up to 4K for digital signage and kiosk applications. The Intel Iris Xe is designed to be compatible with Intel distribution of OpenVINO toolkit, allowing it to perform AI acceleration tasks. With Intel Deep Learning Boost, the GENE-TGU6 is capable of AI compute performance 30 to 40 per cent greater than previous generations.

To meet demands for higher bandwidth data transfer and processing, the GENE-TGU6 has two LAN ports, one powered by the Intel i225 chipset delivering speeds up to 2.5Gbits per second, alongside an Intel i219 port. The board also has four USB3.2 Gen 2 ports as well as USB3.2 Gen 2 Type-C for greater flexibility with modern deployments. Video output is via HDMI 2.0b, two DP1.4a ports, DP1.4a via Type C, and on-board LVDS port (eDP optional). The board has expansion points with multiple M.2 slots, and Mini Card, supporting functions such as Wi-Fi, high speed NVMe storage and AI scalability with modules such as the AI Core XM2280.

For embedded deployment there is TPM2.0, a wide voltage input (9.0 to 36V), and wide temperature operation. Aaeon offers a range of services and support, from customisation to OEM / ODM and manufacturer services.