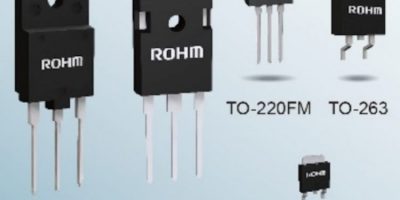 There are 30 new models in the PrestoMOS series of 600V super junction MOSFETs released by Rohm Semiconductor.

Although IGBTs are commonly used as switching elements in inverters that drive motors in home appliances such as refrigerators and ACs, energy savings are pushing demand for MOSFETs with reduced power consumption during steady state operation.

The PrestoMOS series of power MOSFETs is claimed to have the industry’s fastest reverse recovery characteristics, achieving lower power consumption and this latest series leverages Rohm’s proprietary lifetime control technology to achieve ultra-fast trr to reduce power loss by around 58 per cent at light loads when compared with IGBT implementations. Raising the reference voltage needed to turn on the MOSFET prevents self turn-on, which is one of the main causes of loss.

By optimising the characteristics of the built-in diode, Rohm reports that is has improved the soft recovery index specific to super junction MOSFETs, which reduces noise that can lead to malfunctions.