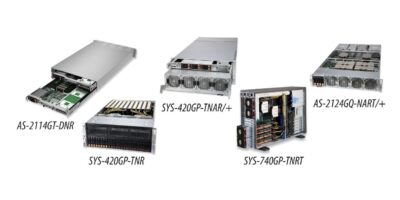 Supermicro’s systems include the flagship Intel-based SYS-420GP-TNAR or the AMD-based AS -4124GO-NART(+), featuring the  4U server powered by the Nvidia HGX A100 eight-GPU board, with the option of either 40Gbyte (HBM2) or 80Gbyte (HBM2e) of memory on each GPU. These systems are currently shipping worldwide.

The range of supported GPUs includes the Nvidia A100 80Gbyte, A100 40Gbyte, A40, RTX A6000, A30, A10, and A16 GPUs, aiming at AI Inference and mainstream computing, mainstream graphics and video, and virtual desktops, all with AI technologies.

All Nvidia products are available across a range of Supermicro systems that use third Gen Intel Xeon Scalable Processors or third Gen AMD EPYC CPUs. Super Micro’s design means more GPUs are packaged into less space (higher density) than other system suppliers. All of the new GPU systems are Nvidia-certified or are currently undergoing certification.

The systems can run various advanced application workloads, including the Nvidia AI Enterprise software suite, which is optimised and certified by Nvidia to run on VMware vSphere, and Nvidia Omniverse Enterprise an end-to-end real-time simulation and collaboration platform for 3D workflows.

Supermicro participates in the Nvidia-Certified Systems program, which validates the hardware and software configurations needed for maximum productivity. These systems can handle massive amounts of data with advanced networking, allowing for complex models to be developed and incorporate new AI and other advanced algorithms. 3D visualisation enables better comprehension of physical reality, while graphics virtualisation enables IT administrators to consolidate systems infrastructure and centralise and secure their data. Nvidia-Certified Systems allow for easy and fast deployment in the data centre. Supermicro also says it leads the industry with NEBS Level 3-certified GPU servers for 5G and telco customers.

According to Charles Liang, president and CEO of Supermicro, the company’s collaboration with Nvidia enables it to design a portfolio of GPU systems and platforms which customers can use to “exactly match their workload requirements to system architecture to achieve superior scale, performance, efficiency, and cost”.

“Supermicro offers multi-GPU optimised systems that deliver advanced solutions to AI, deep learning, high performance computing (HPC) and video streaming applications,” he said. “Leveraging our building block solutions and our time-to-market advantage, we continue developing and releasing application-optimised solutions. Our flexible 2U two-node GPU system with PCIe 4.0 is tuned for cloud gaming and social media and leads the industry with support for up to three double-width or six single-width GPUs per node,” he added.