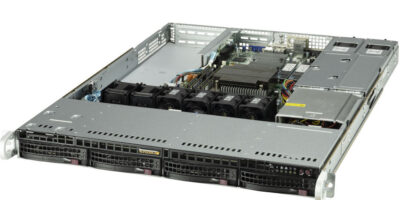 Single processor server systems from Super Micro Computer are based on the new Intel Xeon E-2300 and third generation Intel Xeon Scalable processors. Customers can optimise the configuration needed for an application whether it is for entry-level servers up to the intelligent edge or data centre-class systems, said the company.

The single-socket Intel Xeon Scalable processor-based systems such as the 6U SuperBlade can be used in high-density, multi-node applications. The Supermicro SuperServer E403 wall-mount edge server with higher core counts, greater memory capacity, and faster I/O, is designed for telecomms environments, where it deliver high performance at optimised price points, claims Super Micro.

The single-socket systems deliver the performance and capabilities to power an expanded set of workloads in the data centre and bring data centre-class performance to the edge, Super Micro continued. They feature PCI-E 4.0 I/O, which removes bottlenecks and speeds up applications compared to systems with earlier generations of processors. They also include support for Intel’s SGX security features.

The systems are available in various form factors, including multi-node servers, rackmount servers, and workstations.

Single-socket Third Generation Intel Xeon Scalable processor-based systems support up to 16 DIMM slots, enabling up to 4Tbyte of DRAM or 6Tbyte of DRAM + Intel Optane Persistent Memory (Pmem). This is claimed to be an unprecedented memory capacity for single-socket systems. The Intel Xeon E-2300 processor-based systems deliver essential server performance for small businesses with up to eight cores and 128Gbyte of DDR4 memory at 95W thermal dynamic performance (TDP).

Supermicro servers that use the Intel Xeon E-2300 include MicroBlade for scalable multi-node requirements, MicroCloud, delivering high-density systems for dedicated or scalable cloud hosting, as well as WIO and Mainstream servers.