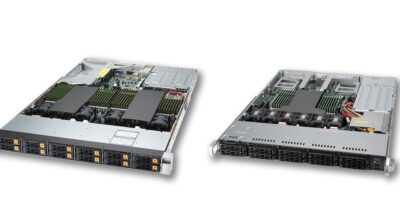 Improving performance by 36 per cent, the twin SuperBlade is based on the AMD EPYC 7003 processor. Supermicro’s SuperBlade on the SPECjbb 2015-Distributed achieved world record benchmarks on the critical-jOPS and max-jOPS tests, reports the company. The SuperBlade delivered up to a 36% improvement from the 2nd Gen to 3rd Gen AMD EPYC CPUs, to boost to enterprise workloads.

The Supermicro A+ line includes servers that incorporate single-socket and dual-socket system. The 2U two-node multi-GPU server is intended for video streaming, high-end cloud gaming, and social networking applications.

The new 3rd Gen AMD EPYC 7003 series processors are designed with the Zen3 core that delivers up to 19 per cent more instructions per cycle than the previous generation and contains up to 64 cores per socket. Systems from Supermicro include compute and storage systems designed for demanding applications including artificial intelligence (AI), high performance computing (HPC), enterprise and cloud deployments.

Charles Liang, president and CEO, Supermicro, explains: “Our building block architecture allows us to deliver a versatile portfolio of systems that maximize the benefits of the 3rd Gen AMD EPYC Processors for specific workloads be it our 2U 2 Node GPU System with PCIe 4.0 for cloud gaming our 2U CloudDC single processor high core count system for storage applications These systems reduce total cost of ownership and total cost to the environment, which is an essential metric as we all have the responsibility to minimise a data centre’s effect on the environment.”

The new A+ product line-up with AMD EPYC series 7003 processors helps leading enterprises reduce time to solution for a wide range of applications, add enhanced security features, and allow all workloads to be run in the cloud, on-premises, or a private cloud. Supermicro has certified AI/ML/DL training inference workload-optimised, certified servers, HCI/SDI, or software-defined storage such as VMWare vSAN, RedHat CEPH, and Weka.IO. Data Management such as Oracle 19c, Apache Hadoop, and Cassandra and HPC application optimisation such Ansys Fluent, OpenFOAM, and WRF all show increased performance.