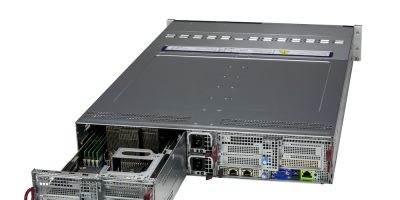 Over 50 server models have been unveiled by Supermicro, made up of more than 15 families for Tier 1 server and storage requirements. The X13 server portfolio is based on fourth generation Intel Xeon scalable processors.

The systems based on the new Intel Xeon Scalable processors (formerly codenamed Sapphire Rapids) deliver up to 60 per cent better workload-optimised performance, said Supermicro, with improved security (hardware root of trust and attestation) and manageability. They are also faster with integrated AI, storage, and cloud acceleration. They have high ambient temperature and liquid cooling options to reduce environmental impact and operating costs.

Charles Liang, president and CEO of Supermicro, explained: “In addition to the processor, every major sub-system has been dramatically upgraded with up to two times improvement in memory performance with DDR5, two times better I/O bandwidth with 80 lanes of PCIe Gen 5  I/O that will support higher performance accelerator cards, and 400Gbits per second networking and improved manageability and security.

“The power and cooling capabilities have also expanded to support 350W CPUs and up to 700W GPUs,” he added.

The X13 systems have been designed from the ground up with Supermicro’s Building Block Solutions approach delivering maximum performance and efficiency while also providing a high degree of flexibility to suit customers’ specific workloads and scale. Supermicro X13 systems can be powered by one, two, four, or even eight 4th Gen Intel Xeon Scalable processors, each with up to 60 cores and support for next-generation built-in accelerators and GPUs up to 700W from companies including Intel and Nvidia. In addition, the support for a range of open industry standards, including OCP 3.0-compliant Advanced IO Modules (AIOM), EDSFF storage, and OCP Open Accelerator Module (OAM) and SXM GPU interconnect, reduces reliance on proprietary technologies. This enables customers to standardise components across the data centre and incorporate Supermicro systems into existing infrastructure with minimal modifications. Utilising open standards-based server management, Supermicro servers can seamlessly be integrated into existing IT environments.