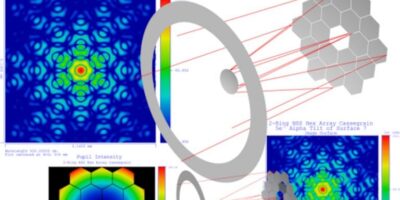 The enhanced CAD modelling capabilities help users visualise volume constraints, define complex aperture shapes for blocking and obstructing rays and create complex prism geometries. These capabilities can also be useful for designing and visualising unusual surface shapes, such as those used in aerospace and automotive applications, including heads-up displays (HUDs).

CODE V version 11.3 also offers two new freeform surface shapes: Q2D Freeform Asphere and Extended Fringe Zernike. Both of these surface types can include X and Y offsets of the aspheric departure from the surface co-ordinate system and can redefine the Z axis of the surface co-ordinate system relative to the Z axis of the base conic. The new freeform surfaces provide correction in systems with significant tilts and decentres, which can be useful for designing lightweight and compact optical systems, such as those in augmented reality/virtual reality (AR/VR) systems. There is also a new 2D co-efficient grid window which makes it easy to preserve desired symmetries in the optical system using freeform surfaces.

The CAD visualisation feature is useful for viewing multiple subsystems simultaneously, as well as comparing the current optical layout to that of a previous revision and allows developers to visualise the system throughout the design process before exporting the final optical model to CAD software.