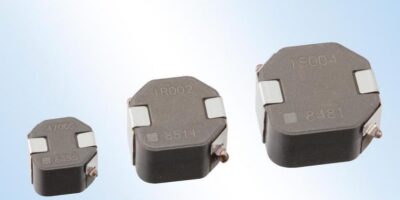 Metal core power inductors from TDK now include the SPM-VT series that is designed especially for the high thermal and current demands of automotive LED headlights. The wire-wound power inductors feature both a broad operating temperature range from -55  to +155 degrees C and high rated currents from 4.7 to 36.6A (Isat), depending on type.

The SPM-VT series is based on TDK’s metallic magnetic material technology that enables a high magnetic saturation density and robust structural design. According to TDK, the metal core power inductors have “superior DC superposition characteristics in a compact size” and feature a rated current that is approximately two to three times higher than that of comparable high-temperature products based on ferrite core materials.

TDK has confirmed it will continue to expand the SPM power inductor line up to include more miniaturised inductors with dimensions of 7.0 x 6.5 x 4.5mm and 5.3 x 5.1 x 3.0mm.

TDK was established in 1935 to commercialise ferrite, a key material in electronic and magnetic products. TDK’s comprehensive portfolio features passive components such as ceramic, aluminium electrolytic and film capacitors, as well as magnetics, high-frequency, and piezo and protection devices. The product spectrum also includes sensors and sensor systems such as temperature and pressure, magnetic, and MEMS sensors, power supplies and energy devices and magnetic heads.

The company’s products are marketed under the product brands TDK, EPCOS, InvenSense, Micronas, Tronics and TDK-Lambda.