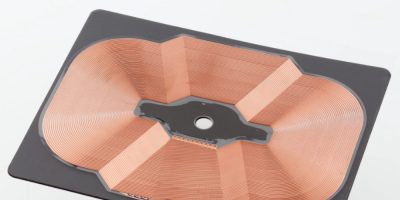 TDK Corporation has introduced a thin pattern coil to support the wireless charging of next generation mobile devices.

The WCT38466-N0E0SST101 was developed without employing conventional lithographic exposure / etching techniques. Instead, TDK’s process technology was leveraged, in combination with plating technology using the nano dispersion of the organic compound polypyrrole, developed by Achilles Corporation.

Although wireless charging coils have generally been produced by winding wires, this new approach has made it possible to manufacture them using a thick copper pattern on a thin film. Along with the application of TDK’s proprietary magnetic materials, this has enabled coil thickness reduction down to 0.76mm, which is approximately one fifth of the thickness of traditional 3.8mm diameter wound wire coils. The use of TDK’s original optimal coil shape pattern means that the new coils cover a larger charging area, enhancing user convenience, claimed the company.

The uptake of demand for wireless charging is being seen in home, office, retail and automotive environments. With their “dramatically thinner” diameters, the TDK coils, which are compliant with the Wireless Power Consortium’s Qi standard, will open new opportunities for wireless charging deployment. Previously, three coils had to be incorporated into wireless charging systems, but now only one coil will be required, enabling system miniaturisation, according to the company.

Based in Tokyo, Japan, TDK was established in 1935 to commercialise ferrite, a key material in electronic and magnetic products. TDK‘s comprehensive portfolio features passive components, such as ceramic, aluminium electrolytic and film capacitors, as well as magnetics, high frequency, and piezo and protection devices.

The product spectrum also includes sensors and sensor systems such as temperature and pressure, magnetic, and MEMS sensors. In addition, TDK provides power supplies and energy devices and magnetic heads. These products are marketed under the product brands TDK, EPCOS, InvenSense, Micronas, Tronics and TDK-Lambda. TDK focuses on automotive, industrial and consumer electronics, and information and communication technology markets.

Achilles Corporation is a plastics processing manufacturer established in 1947. Its business areas include Syunsoku and other brands of shoes and businesses in construction / civil engineering, manufacturing/facilities, electricity / electronics, vehicles, agriculture / livestock, medical / disaster prevention and lifestyle / leisure. The company began researching and developing the control of static electricity using polypyrrole in the 1980s and established a plating technology using the nano dispersion of polypyrrole in 2007.