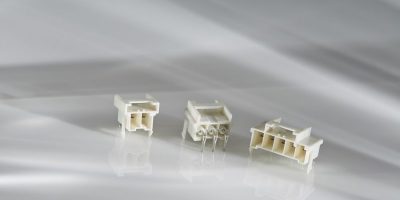 Designed for through-hole PCB applications, right-angle and vertical PCB headers have been added to the Power Triple Lock connector range, by TE Connectivity.

These through-hole headers significantly expand wire-to-board applicability for this family of connectors in appliance, HVAC, automation and control, automotive, and other industries’ designs.

The new right-angle headers are offered in both standard temperature (105 degree C) and high temperature (150 degree C) materials to present a new board mount configuration for Power Triple Lock connectors. They incorporate contoured retainers that provide retention when snapped into the board. New vertical headers in the standard temperature material join previously announced high-temperature vertical headers. All are moulded of UL 94 V-0-rated material, and all are UL recognised and VDE-certified.

Power Triple Lock connectors are based on a 6.0mm centre line and are rated up to 20A and 600V AC/ V DC. With a locking latch, along with optional CPA (connector position assurance) and TPA (terminal position assurance) devices, they help increase connection reliability, says TE Connectivity. The CPA device helps to assure the connector is fully mated and remains engaged during shipment, installation and use, while the TPA helps to assure that contacts are fully seated in the housing.

To support applications where more than one connector of the same position size may be present, Power Triple Lock connectors are offered in four different colour-coded physical keying options. This can help to prevent improper mating while also supporting efficient assembly.