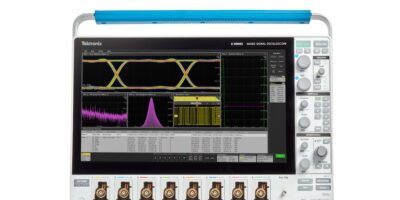 Offering increased bandwidth, lower noise and more channels than similar products in its class, the 6 Series B mixed signal oscilloscope (MSO) extends the performance threshold of the Tektronix mainstream oscilloscopes portfolio to 10GHz and 50Gsamples per second.

The 6 Series B MSO offers up to 10GHz of upgradable bandwidth and up to 50Gsamples per second sample rates to provide users better visibility of signals in high-performance designs. Signal fidelity is claimed to be industry-leading, contributing less than 51.1 microV of noise at mV/div and 1.0GHz, and less than 1.39mV of noise at 50 mV/div and 10GHz. The 6 Series B MSO is also claimed to be the industry’s first oscilloscope with bandwidth more than 2GHz to offer four, six or eight channels. Each FlexChannel input can be converted into eight digital channels using a TLP058 logic probe for added visibility.

The 6 Series B MSO offers a range of options to streamline protocol decoding, compliance testing for serial standards, jitter analysis, and power analysis. Built-in digital down converters (DDCs) behind every channel enable multi-channel spectrum analysis, and spectrum measurements are synchronised with time domain waveforms to enable correlation between RF and time events.

There is a responsive 15.6 inch HD capacitive pinch-zoom-swipe touch display, which is the industry’s largest, according to Tektronix. It provides an intuitive drag and drop, object-oriented user interface.

Tektronix has also launched the TDP7710 TriMode probe, which extends the line of TriMode probes to match the advancements of the new oscilloscope.

Chris Witt, vice president and general manager at Tektronix explains why the MSO was introduced. “Embedded designs are growing more sophisticated by incorporating additional sensors that generate increasing amounts of data. This instrument addresses the new requirements of testing these systems to advance video, motion and 3D sensing technologies,” he said.

The 6 Series B MSO is designed for higher speed embedded designs in the industrial, medical, consumer and computer markets, where mixed signal design troubleshooting and accelerating serial bus speeds are routinely incurred. The 6 Series B MSO is also highly-effective for diverse applications in semiconductors, power integrity, automotive, defence, aerospace and research.

This series expansion includes the world’s first 10 GHz oscilloscope that is capable of switching between Windows 10 and closed operating systems, without loss of performance or ease-of-use. A removable SSD and optional security licenses enable the use of the oscilloscope in secure environments, adds Tektronix.

The 6 Series B MSO is now available worldwide. Each unit receives Tektronix’s one-year warranty on the instrument and included probes (one TPP1000 1 GHz voltage probe per channel).