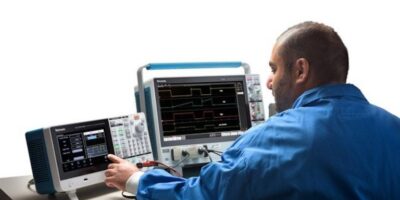 Measuring and evaluating switching parameters of silicon carbide (SiC) and gallium nitride (GaN).power devices can be simplified with the double pulse test software plug-in for AFG31000, available from Tektronix.

The software plug-in for the AFG31000 arbitrary/function generator makes it possible to perform crucial double pulse testing in less than a minute, saving a significant amount of time when compared to alternative methods, says Tektronix.

Engineers can quickly define pulse parameters from a single window on the AFG31000’s large touchscreen display and then generate the pulses they need to perform testing – in less than 60 seconds. The application offers impedance adjustment of pulse width and the time gap between each pulse, up to 30 pulses. Pulse widths can range from 20 nanoseconds to 150 micro seconds.

The plug-in allows test systems to be set up easily and for parameters to be changed quickly. “This represents a huge increase in productivity for power engineers, translating into significant cost savings and shorter time to market,” said Chris Bohn, vice president and general manager of the Keithley Product Line at Tektronix.

Double pulse testing is used by researchers and design and test engineers in the power and semiconductor industries to measure and evaluate the switching parameters and dynamic behaviour of power devices, including those made from wide bandgap materials such as SiC and GaN.

To perform a double pulse test, an engineer needs to precisely generate at least two voltage pulses with varying pulse widths and timing to trigger a MOSFET or IGBT power device. Measurements are taken with an oscilloscope, like a Tektronix 5 Series MSO. The AFG31000 is claimed to have the largest touchscreen in its class, and has patented InstaView technology that automatically detects and compensates for impedance mismatches, programmable waveform sequencing. It also has the ArbBuilder tool for easily creating and editing arbitrary waveforms.