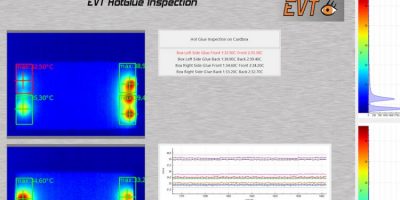 The HotGlue Inspector inspects, if the adhesive points between cardboard surfaces of boxes, are present and hot enough to glue the cardboard box together. It can monitor up to 60 boxes or bottles per second (or 3,600 boxes per minute).

The cameras can be arranged so that the sides with the adhesive points are in the field of view of the thermal imaging camera. The EyeVision HotGlue Inspector inspects if the glue has been applied to all adhesive joints and if the temperature of the glue at the joint is ranging inside the threshold to ensure the boxes keep the contents safe and do not fall apart during transportation from the production site to the shop or when transported by a customer.

Glue cannot be delivered if a nozzle is blocked or if the glue has not been fed. If there is no glue at an adhesive joint, this is detected automatically. It will be also detected, when the temperature of the glue is too low, which can happen when the heating is defective or due to a delay in the plant. In case only one or more adhesive joints are showing a temperature that is not high enough, then the error can be matched to the respective gluing device for repair. When all adhesive joints show a temperature which is too low then the carton can be ejected completely.

The EyeVision HotGlue system can be optimally adjusted, for example, when the adhesive joints should only be inspected on one side, then a system with only one camera is sufficient. When more than one side should be inspected, two or four cameras can be used.

An embedded mode allows the integration of the system into a complex plant for the results of the measurements and the evaluation images to be immediately available for the line control.

In addition the HotGlue system can be equipped with standard 2D cameras. Those can then read codes (bar codes, DMC, QR or OCR/OCV) on the outside packaging, to guarantee a complete tracking of the production.