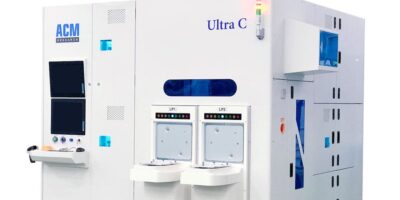 The high-throughput, four-chamber system is designed for single wafer wet processes, including cleaning, etching and surface finishing. It is intended for the manufacture of both MOSFET and IGBT devices for the power semiconductor market. The touch-free handling and processing based on the Bernoulli effect eliminates possible wafer damage and improves final device yield, claims ACM Research. The system supports 200mm and 300mm Si wafers and is suitable for Taiko wafers down to 50 micron thickness, thin wafers of less than 200 micron thickness, high aspect ratio (above 10:1) deep-trench wafers as well as double-thickness bonded wafer pairs.

The tool’s handling system is programmable to accommodate deep-trench, Taiko and thin wafers, or bonded wafers. The robot arms for loading and unloading, as well as the chuck, have been designed for non-contact wafer handling using a proprietary method based on the Bernoulli effect. Nitrogen gas (N2) provides constant pressure to keep the wafer floating in place on the arm, which can be flipped for processing on either side while still holding the wafer in place. This allows for handling high-warpage wafers without contact.

During the wet process, the wafer sits front-side down on a Bernoulli chuck, where an N2 flow cushions the wafer, protecting it and keeping it dry. This proprietary design, using ACM’s patented technology on a Bernoulli chuck, features a recipe-controlled gap between the wafer and chuck to meet requirements for undercut width control on the wafer device side edge, as well as pin-mark-free control. Additionally, the system can be configured to include an optional thickness measurement function.

Each chamber can be configured with up to four swing arms for delivering process chemistries such as wet etchants, solvents, RCA cleaning chemicals, de-ionised water and nitrogen. Additionally, the chambers are designed to allow reclaiming of two types of chemicals.