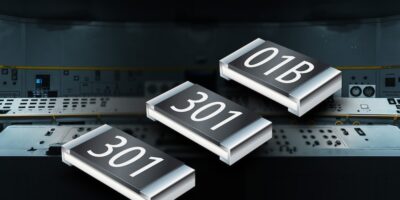 Three high power rated thick film resistor model series have been announced by Bourns. The Models CMP/CMP-A are anti-surge devices that feature a wide resistance range from 1.0 Ohm to 1.0 MOhm and high rated power up to 1.5W. Supporting even higher power designs, the third addition is the Bourns Model CHP-A resistor series, which delivers triple-rated power. One model provides 3W of rated power at 70 degrees C, which is one of the highest rated resistor power offerings in the industry, claims Bourns.

Models CMP-A and CHP-A are AEC-Q200-compliant and sulphur-resistant. They meet, says Bourns, the growing need for more ruggedised components that can operate reliably in certain harsh environments.

The resistance range, high rated power and superior pulse load features of the CHP-A and CMP/CMP-A series resistors make them suitable for current sensing in a variety of applications such as consumer electronics, industrial automation, power supplies, LED lighting and communication base stations.

The fixed resistors have been designed to operate in certain harsh environments with higher levels of sulphur contamination. They are manufactured using a thick film element printed onto a ceramic substrate, and tested in accordance with ASTM B809-95 methods which analyse the porosity of metallic coatings exposed to humid sulphur vapour.