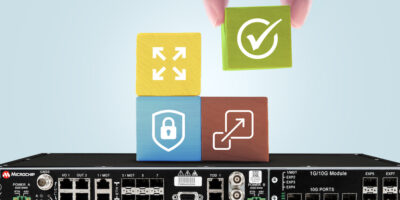 Microchip’s TimeProvider 4100 Release 2.3 grandmaster introduces a resilient multi-client precision time protocol (PTP) optional license, providing customers with up to three connections to other grandmasters in the operator’s network. This capability can be used as a back up for time and phase input. This implements the IEEE 1588 2.1 standard majority vote mechanism to select the best input for assisted partial timing support (APTS) back up protection.

The increased security includes support for IEEE 1588 2.1 2019 standard, and for  architecture guidance security, which uses redundant communication paths between PTP nodes to detect tampering. It also implements out-of-band management mechanisms for detecting tampering, degradation and failures. There is also support for authentication, authorisation and accounting as well as two-factor authentication.

PTP enhancements including increased capacity of up to 1,000 network clients, which is required for certain applications such as data centres. There are also enhancements to the E1/T1 expansion module with new signals such as composite clock and JCC (Japan CC format), both inputs and outputs, for increased integration with legacy systems.

The software update, TimeProvider 4100 Release 2.3 is available for new and already-deployed systems. Other features include: