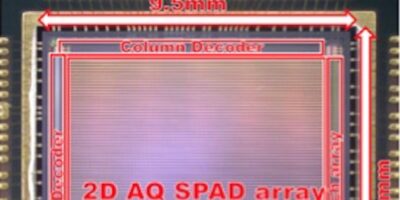 The technology is based on Toshiba’s proprietary compact, high-efficiency silicon photo-multiplier (SiPM). The company says that by removing the need for bulky mechanical components, the technology realises cost and space savings and enhances operational reliability.

In general, SiPM are suitable for long range measurement as they are highly light sensitive. SiPM’s light-receiving cells however, require recovery time after being triggered, and in strong ambient light condition they also need a large number of cells, as reserve cells are needed to react to reflected laser light.

Toshiba’s lidar system can be built with commercial lenses, which eliminates complex customisation, for application in a variety of self driving vehicles. The compact nature of the technology allows it to be placed in multiple locations on vehicles that had previously presented a major challenge and will also broaden the appeal and feasibility of lidar outside of the automotive sector.

Toshiba says it will continue R&D to further extend lidar measuring range, raise resolution and advance miniaturisation, and is aiming for a practical use of the SiPM to be available in 2022.