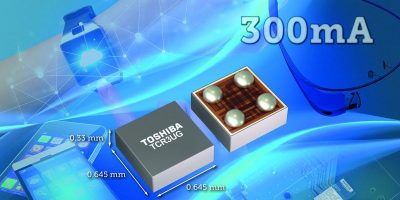 The TCR3UG series of LDO regulators have an output current of 300mA, making them suitable for power management of IoT modules, wearable devices and smartphones.

The TCR3UG series of LDO regulators are housed in the WCSP4F package, which measures just 0.645 x 0.645mm with a maximum thickness of only 0.33mm. These dimensions help to reduce the size, especially the thickness, of mobile devices in applications such as smart cards.

The regulators have an input voltage range of 1.5 to 5.5V DC and exhibit a quiescent current of typically just 340nA. With this low quiescent current, they still offer an excellent ripple rejection ratio of 70dB and a load transient response of ±60mV, adds Toshiba.

The LDO regulators are suitable for use as part of the power supply in applications that require long battery life, as well as applications that are susceptible to noise or fluctuations of the supply voltage, advises Toshiba.

The TCR3UG series regulators are available with 31 output voltages, ranging from 0.8 to 5.0V. Additionally, variants with and without automatic output discharge are available, allowing designers to select the device that best meets the application’s requirements. Shipment of the first products in the series has commenced.