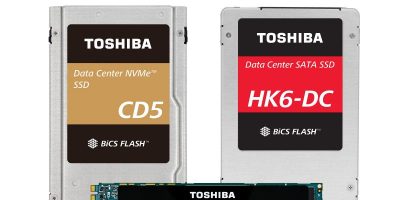 “Demand for flash storage in data centres continues to grow rapidly – with capacity shipped into the enterprise expected to increase at a 58 per cent CAGR through 2021,” said Jeff Janukowicz, IDC Research Vice President for Solid State Drives and Enabling Technologies.  “In order for hyperscale, virtualisation, automation/orchestration and software-defined storage applications to thrive, cloud data centres must meet specific workload requirements,” he says.

Toshiba’s SSDs use its next-generation BiCS FLASH 3D flash memory, which is based on the company’s 64-layer architecture and uses three-bit-per-cell (triple-level cell, TLC) technology. The CD5, XD5 and HK6-DC SSD families are designed with end-to-end vertical integration to deliver quality and reliability, adds Toshiba.

The CD5 series supports capacities ranging from 960Gbyte in a U.2 form factor, delivering 500,000/35,000 random read/write IOPS and up to 3,140/1,980Mbyte per second sequential read/write performance within a nine to 14W power envelope.

The XD5 Series is a small footprint M.2 22110 form factor SSD that supports capacities up to 3.84Tbyte and delivers up to 2,600/890Mbyte per second sequential read/write performance in a 7.0W power envelope. These SSDs are optimised for low latency and performance consistency in read-intensive workloads, and targeted at open compute platform (OCP) and hyperscale/cloud applications.

The HK6-DC series is a 6Gbit/s SATA SSD and is available in 960Gbyte, 1.92Tbyte and 3.84Tbyte capacities. This read-intensive, latency-optimised SSD delivers up to 85,000 random read IOPS and up to 550Mbyte per second sequential read performance. These performance numbers are more than 400 times better than those of a 15,000 rpm higher performance hard disk drive (HDD), points out Toshiba.

Toshiba will begin shipping samples of the CD5, XD5 and HK6-DC SSD families to select customers in Q2 2018.