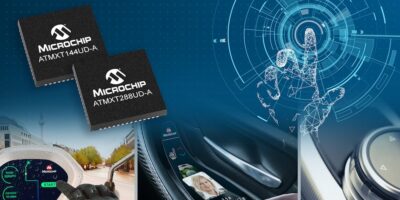 Claimed to be the industry’s smallest automotive grade touch screen controllers, the MXT288UD family has been released by Microchip.

They support secondary displays, i.e. beyond the centre information display, which are being increasingly used in automotive design.

Secondary touch surfaces can be placed in the interior of cars and exterior of a motor vehicle, such as handlebars, doors, electronic mirrors, control knobs, the steering wheel, between seats or in an armrest. The MXT288UD family’s small 7.0 x 7.0mm automotive grade VQFN56 package allows tier one suppliers to reduce board space by 75 per cent and minimise the bill of material cost, while exceeding the requirements for reliable touch performance in the market, says Microchip. The family’s low power, wait-for-touch mode consumes less than 50 microA and remain responsive, even if the display switches off to save power or to avoid disturbing the driver at night. The system will awaken by a touch event anywhere on the touch surface.

The MXT288UD-AM and the MXT144UD-AM controllers enable detection and tracking of multi-finger thick gloves through a variety of overlay materials and thicknesses, including leather, wood or across uneven surfaces, even in the presence of moisture, Microchip assures. Normally the dielectric constant of these overlay materials would limit the detection of the touch, however the MXT288UD-AM and the MXT144UD-AM detect and track multi fingers with a high signal to noise ratio (SNR) and through a proprietary differential mutual acquisition scheme.

In car sharing applications, the touch functionality helps users access a car from the outside by tracking touch coordinates on an exterior display in any weather. The same functionality will be a benefit to motorcycles and other motorbike vehicles.

The MXT288UD family provides proven firmware, developed according to Automotive Spice processes and is AEC-Q100-qualified for integration into existing systems at a lower risk with faster time to market.

Software support tools include maXTouch Studio and a maXTouch analyser. For the MXT288UD, there is an evaluation kit with a PCB and a five inch capacitive touch panel. There is also an evaluation kit for the MXT144UD which includes a PCB and a 2.9 inch capacitive touch pad. For both devices, a bridge PCB is included with a USB connection for interfacing to a computer when running maXTouch Studio.

There is also support from Microchip’s touch function group and FAEs to help with the development and tuning of touch sensors and integration into the final application.