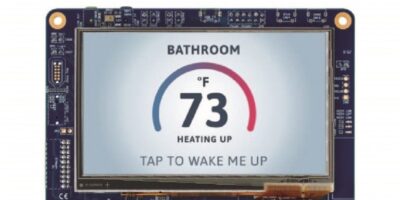 TouchGFX is a free tool in the STM32 ecosystem. It comprises of the TouchGFX Designer PC tool for designing and configuring rich user interfaces and TouchGFX Engine software that runs on the end-device to secure high user interface (UI) performance. The latest version 4.12 contains updates to both.

Users can now build sophisticated user interfaces on one-chip displays without external RAM or flash. They can also save power for longer battery life and benefit from easier development to get to market faster, adds ST.

In TouchGFX Engine, a partial frame buffer mode now allows the buffer to operate using as little as 6kbyte of RAM. A fully functioning UI can now have just 16kbyte of RAM, so that small STM32 microcontrollers do not require external memory to execute “great user experiences” says ST.

The updates to TouchGFX Designer include extensions to the powerful set of customisable widgets, adding features such as scale and rotate that increase the power of simple drag-and-drop programming. Custom triggers and actions reduce reliance on coding to create sophisticated features, and a new image tab lets users quickly configure individual attributes such as image format, dither algorithm, and layout rotation.

The TouchGFX Suite, including TouchGFX Designer and TouchGFX Engine, is available to download free of charge.