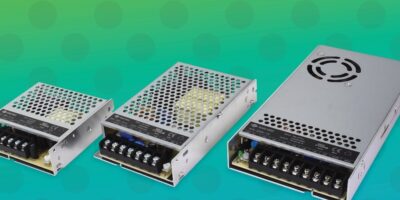 Active power factor correction and over-temperature protection are features of models in the VGS-D series. They offer power ratings from 75 to 320W and carry voltages from 5.0, 12, 15, 24, and 48V DC.

Most models are convection cooled, but the higher power VGS-350C and VGS-320D both use forced air cooling with a built-in temperature-controlled fan.

All models have a screw terminal interface, along with short circuit, over-current, and over-voltage protection. Terminal cover and conformal coating options are also available.

CUI is a Bel group company. Bel designs, manufactures and markets a broad array of products that include circuit protection, connectors, cable assemblies, discrete components, magnetics and power supplies. The company serves a global market and operates facilities around the world.