Two 3U OpenVPX boards creep into 6U performance rates 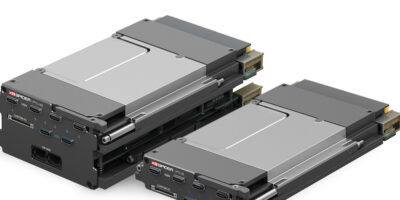 The X9 Spider 3U OpenVPX single board systems have been developed with the Modular Open Standards Approach (MOSA) and are aligned to the the Open Group Sensor Open Systems Architecture (SOSA) technical standard. “The upside of OpenVPX and SOSA is interoperability and . . . a modular open standards approach (MOSA), but the backplane can also be restrictive for I/O, bandwidth and upgradeability,” says Ben Sharfi, GMS founder and chief architect.

The X9 Spider VPX-HS and VPX-S are based on an Intel 11th generation Tiger Lake-H 8 Core i7 CPU with 64Gbyte of memory. Conduction- and air-cooled versions are available. Both are intended for deployment in military and aerospace or rugged applications.

They have a large bandwidth via multiple sealed USB4 and 100Gbit Ethernet ports, offering up to 455Gbits per second. This is sufficient to free designers from the bottlenecks of the OpenVPX backplane, says GMS, while remaining interoperable with other industry vendors’ boards and systems.

The single-slot X9 SPIDER VPX-S that omits the dual 100Gbits per second Ethernet fibre ports, the MXM site, and has dual M.2 SSDs.

PCIe Gen 4 on-board fabrics move data to the backplane and the 100Gbit Ethernet ports at 16Gtransfer per second with low latency. As a SOSA-aligned payload profile board, all mandatory I/O is present on the P0-P2 connectors, making the board backplane interoperable with other vendors and in spirit with the DoD [Department of Defense] Tri-Service memo requiring a Modular Open Standards Approach (MOSA) to systems design.

The X9 Spider VPX-HS and VPX-S modules also provide sealed USB4/Thunderbolt4 and scalability. “Even though they’re SOSA-aligned and interoperable, we also provide the industry’s highest-performance features and a path for system-level technology refresh with CPU and pinout upgrades that avoid backplane re-spins,” added Sharfi.