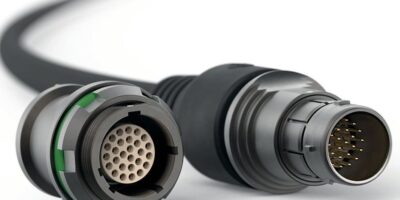 Compatible with NATO STANAG 4695, the Fischer UltiMate 80 is a rugged, harsh environment, quick release connector introduced by Fischer Connectors. The company has also introduced the standard UltiMate in size 15 and with up to 27 signal and power contacts.

Intermateable with other NATO STANAG 4695 connectors, the field-ready Fischer UltiMate 80 connector comes in two layouts featuring six or seven signal and power contacts (size 08) with up to AWG 22. Engineered in Switzerland, it offers rugged, lightweight and IP68-sealed connectivity in harsh environments but is particularly intended for defence and security applications and military modernisation programmes, says Fischer. The rugged design is compliant with MIL-STD-810 and MIL-STD-202, providing environmental and mechanical performance and endurance, claimed to outperform similar connectors from other suppliers.

The other introduction is the Fischer UltiMate connector in size 15. It meets special power and high-speed data requirements for further design and technology developments with various contact layouts (two, four, eight,12 or 27 signal and power contacts).

These new connectors are part of the rugged, compact, and lightweight Fischer UltiMate Series. The connectors for defence and security, industrial, instrumentation, marine and underwater, as well as robotics and unmanned vehicles have a resin-sealed contact block which offers extreme sealing (up to IP68 / IP69 even unmated, gastight, CBRN decontamination), high shock and vibration resistance, as well as superior cable resistance in terms of traction, claims Fischer.

Fischer Connectors Group’s headquarters, R & D and manufacturing facilities are located in Saint-Prex, Switzerland. There are also cable assembly sites in EMEA, the Americas and Asia Pacific. The Group also includes local subsidiaries and a wide network of distributors and agents all over the world.