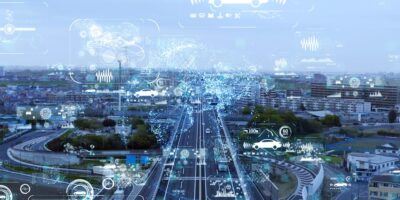 A vehicle tracking system is ideal for monitoring either a single car or an entire fleet of vehicles. A tracking system consists of automatic tracking hardware and software for data collection (and data transmission if required). The global fleet management market size was valued at USD $8 billion in 2015 and is anticipated to exceed USD $22 billion by 2022, growing at a CAGR of over 20% from 2016 to 2023 (Source: Global Market Insights). The rising demand for commercial vehicles in regions such as Latin America, the Middle East, and Africa also represents a potential growth opportunity. In more developed regions such as Europe and North America, integration of Internet of Things (IoT) technology in vehicles is expected to boost the adoption rate of vehicle tracking systems, although the high cost of integration has slowed this progress. Further, the Asia Pacific vehicle tracking market size is anticipated to witness significant growth over the forecasted period, with Japan, India, and China being the primary driving countries. These emerging markets have high potential, primarily due to their many commercial vehicles.

Active vs. Passive Trackers
Active and passive trackers collect data in the same way and are equally accurate. The main difference between the two types involves time. Active trackers are also called real-time trackers, because they transmit data via satellite or a cellular network, which instantly indicates where the vehicle is located. In this way, a computer screen can display this movement in real-time. This makes active tracking the best choice for businesses interested in improving the efficiency of their deliveries and monitoring their employees driving in the field. An active tracker also has geo-fence capabilities (think of this feature like a force field), providing an alert when the vehicle enters or exits a predetermined location (Source: RMT Corporation). These kinds of systems can also help prevent theft and help recover stolen vehicles. Of course, active GPS tracking devices are more expensive than passive ones and require a monthly service fee.

Passive trackers, on the other hand, are less costly, are smaller, and are easier to conceal. Their downside is that they have limited data storage. They store the information on the device instead of transmitting the data to a remote location. The tracker must be removed from the vehicle and plugged into a computer to view any of its information. These systems are good for people tracking their mileage for work purposes, or for businesses interested in reducing the misuse of their vehicles. Also, they are often chosen for monitoring the actions of people as well (think of detective work). Passive trackers are a good choice if immediate feedback is not required and there is a plan to regularly check the device’s data.

Both types of trackers are portable in nature and have a relatively small form factor. Therefore, battery power is required, as is backup capability to preserve data in case of power loss. Due to the higher automotive system voltages and currents required to charge the battery (typically a single-cell Li-ion cell), a switchmode charger is desirable for its higher charging efficiency when compared to a linear battery charging IC, as less heat in the form of power dissipation is generated. In general, embedded automotive applications have input voltages up to 30 V, with some even higher. In these GPS tracking systems, a charger with the typical 12 V to single-cell Li-ion battery (3.7 V typical) with added protection to much higher input voltages (in case of voltage transients from battery excursions), plus some sort of backup capability would be ideal.

Traditionally, a tracker’s backup power management system for batteries consisted of multiple ICs, a high voltage buck regulator, and a battery charger, plus all the discrete components; not exactly a compact solution. Hence, early tracking systems were not very compact in form factor. A typical application for a tracking system uses an automotive battery and a 1-cell Li-ion battery for storage and backup.

Why is it then that a more highly integrated power management solution is needed for tracking systems? Primarily, it is needed to reduce the size of the tracker itself; smaller is better in this market. Furthermore, there are requirements for safely charging the battery and protecting the IC against voltage transients, a need for system backup in case system power goes away or fails, and for powering the relatively lower rail voltages of the general packet radio service (GPRS) chipsets at ~4.45 V.

An integrated power backup manager and charger solution, which solves the outlined objectives requires the following attributes:
. Synchronous buck topology for high efficiency
. Wide input voltage range to accommodate a variety of input power sources, plus protection against high voltage transients
. Proper battery charge voltage to support the GPRS chipset
. Simple and autonomous operation with onboard charge termination (no microcontroller needed)
. PowerPath control for seamless switchover between input power and backup power during a power fail event; it also needs to provide reverse blocking if a shorted input occurs
. Battery backup capability for system load power when the input is not present or fails
. Small and low profile solution footprints due to space constraints
. Advanced packaging for improved thermal performance and space efficiency

To address these specific needs, Analog Devices recently introduced the LTC4091—a complete, Li-ion battery backup management system for 3.45 V to 4.45 V supply rails that must be kept active during a long duration main power failure. The LTC4091 employs a 36 V monolithic buck converter with adaptive output control to provide power to the system load and enable high efficiency battery charging from the buck output. When external power is available, the device can provide up to 2.5 A of total output current and up to 1.5 A of charge current for a single-cell, 4.1 V or 4.2 V Li-Ion battery. If the primary input source fails and can no longer power the load, the LTC4091 provides up to 4 A to the system output load from the backup Li-ion battery via an internal diode, and relatively unlimited current if an external diode transistor is used. To protect sensitive downstream loads, the maximum output load voltage is 4.45 V. The device’s PowerPath control provides a seamless switchover between input power and backup power during a power fail event and enables reverse blocking with a shorted input. Typical applications for the LTC4091 include fleet and asset tracking, automotive GPS data loggers and telematics systems, security systems, communications, and industrial backup systems.

The LTC4091 is housed in a low profile (0.75 mm) 22-lead 3 mm × 6 mm DFN package with a backside metal pad for excellent thermal performance. The device operates from –40°C to +125°C. Figure 1 shows its typical application schematic. 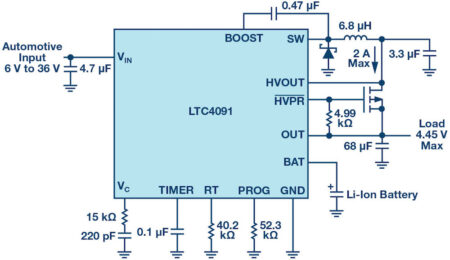 Thermal Regulation Protection
To prevent thermal damage to the IC or surrounding components, an internal thermal feedback loop automatically decreases the programmed charge current if the die temperature rises to approximately 105°C. Thermal regulation protects the LTC4091 from excessive temperature due to high power operation or high ambient thermal conditions, and allows the user to push the limits of the power handling capability with a given circuit board design without risk of damaging the LTC4091 or external components. The benefit of the thermal regulation loop is that charge current can be set according to actual conditions, rather than worst-case conditions with the assurance that the battery charger will automatically reduce the current in worst-case conditions.
Automotive Cold-Crank Ride Through
Automotive applications experience large dips in supply voltage, such as during a cold-crank event, which can cause the high voltage switching regulator to lose regulation, resulting in excessive VC voltage and consequently excessive output overshoot when VIN recovers. To prevent overshoot when recovering from a cold-crank event it is necessary to reset the LTC4091’s soft-start circuit via the RUN/SS pin. Figure 2 below shows an example of a simple circuit that automatically detects a brown-out condition and resets the RUN/SS pin, re-engaging the soft-start feature and preventing damaging output overshoot.

Conclusion
The adoption rates of automotive and fleet vehicle tracking systems are on the rise. Modern tracker form factors have shrunk and features have grown to include active data transmission for real-time tracking. Furthermore, backup capability and lower voltages to power the system GPRS chipset are needed. Analog Devices’ LTC4091 is a high voltage, high current buck battery charger and PowerPath backup manager with thermal regulation and other extensive protection that comprises a 1-chip, compact, powerful, and flexible solution for vehicle tracking applications, thus making a designer’s task simpler and easier.

Steve Knoth [steve.knoth@analog.com] is a senior product marketing engineer in Analog Devices’ Power by Linear™ Group. He is responsible for all power management integrated circuit (PMIC) products, low dropout regulators (LDOs), battery chargers, charge pumps, charge pump-based LED drivers, supercapacitor chargers, low voltage monolithic switching regulators, and ideal diode devices. Prior to joining Analog Devices (former Linear Technology) in 2004, Steve had held various marketing and product
engineering positions since 1990 at Micro Power Systems, Analog Devices, and Micrel Semiconductor. He earned his bachelor’s degree in electrical engineering in 1988 and a master’s degree in physics in 1995, both from San Jose State University. Steve also received an M.B.A. in technology management from the University of Phoenix in 2000. In addition to enjoying time with his kids, Steve can be found tinkering with pinball/arcade games or muscle cars; and buying, selling, and collecting vintage toys and movie/
sports/automotive memorabilia.