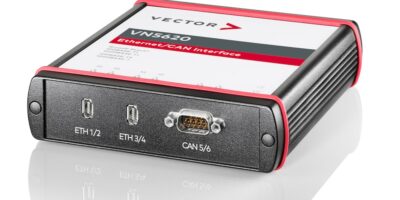 The VN5620 is a compact and powerful interface for Ethernet networks and CAN/CAN-FD from Vector. For example, Ethernet monitoring ensures a transparent connection between two nodes with a precise timestamp. Free hardware configuration options make it possible for users to design an existing bus simulation with CANoe.Ethernet. It also has media conversion functions and a data link between 100BASE-T1/1000BASE-T1 and the 100BASE-TX/1000BASE-T physical layer. According to Vector the VN5620 enables testers to access each port individually. This makes it possible to test several identical systems on a test bench and perform vehicle diagnostics.

Configuration options can be selected to make it easier for the user to handle high data rates. Testers can implement different test requirements by connecting different segmentation types together. The saved configurations can be quickly restored, advises Vector. This function can also be activated without a PC connection. Users can use the VN5620 either as a network interface or an expansion device for the VN8914, the modular, high performance interface hardware with channel combinations for CAN, CAN-FD, LIN, FlexRay, J1708 and the K-Line from Vector.

The VN5620 can be used at the office and on test benches; the temperature and voltage ranges have been designed accordingly, said Vector.

Vector manufactures software tools and embedded components to develop electronic systems and their networking with systems from CAN to automotive Ethernet.

Vector has been a partner of automotive manufacturers and suppliers and related industries since 1988.

Worldwide customers in the automotive, commercial vehicles, aerospace, transportation, and control technology industries rely on the solutions and products of the independent Vector Group for the development of technologies for future mobility.