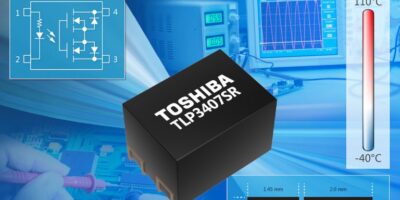 The photorelay is provided in a compact S-VSON4T package. This is a reduction of around 27 per cent when compared to the existing VSONR4 package.

It has a maximum LED current of just 1mA at the input, which represents a reduction to approximately 33 per cent of that of its predecessor, the TLP3407SRH. The TLP3407SR photorelay allows the product to offer a maximum input power dissipation of 3.3mW, confirms Toshiba.

The photorelay can be used with higher voltages of 5.0V or above. It can be powered by adding an external resistor in series, allowing designers to implement a maximum trigger LED current of 0.2mA, expanding the range of permissible input voltages to simplify circuit design.

The reduced input power dissipation of the voltage drive photorelay is suitable for reducing the power consumption of a wide variety of equipment including probe cards, automatic semiconductor test equipment (ATE) and semiconductor testers, advises the company.