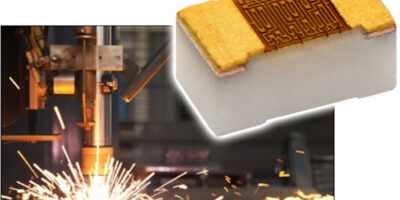 The resistor has a standoff terminal construction for mounting reliability, added New Yorker. The FRFS has a non-inductive, non-capacitive design and is based on Vishay Precision Group (VPG)’s new generation Z1 foil technology of precision foil resistor elements. The configuration provides a substantial PCB space saving as compared to a surface mount chip with wraparound terminations, confirmed the company. It is, said VPG, the smallest SMD resistor with ultra high-precision performance.

The standoff construction allows visual inspection of the solder connection after mounting, which is not possible in standard flip chip construction resistors because they are closely attached to the PCB. The construction increases the rated power, due to the increased heat dissipation through the thick terminals.

The FRFS series boasts a resistance range of 170 Ohm to 1kOhm, including every value within this range. It is available in five different tolerant ranges from ±0.05 to ±1.0 per cent and supplies power to 75mW.

The design features more robust solder pads than other construction options for a non-hot spot operation. It also increases the power rating and is field-proven for two years. The FRFS0402 is intended for use in demanding applications such as 5G, fibre optics data transmission networks or high temperature sensors. The gold-finished solderable terminals are intended for high temperature applications (above 200 degrees C).

New Yorker Electronics is a certified, franchised distributor of electronic components, established in 1948. It is an AS9120B and ISO 9001:2015 certified source of passive components, discrete semiconductors, electromechanical devices, flash and DRAM modules, embedded board solutions, power supplies and connectors, and operates exclusively at heightened military and aerospace performance levels.

New Yorker Electronics operates in strict accordance with AS5553 and AS6496 standards in its everyday procedures to thwart the proliferation of counterfeit parts. It is a member of ECIA (Electronics Component Industry Association) and of ERAI (Electronic Resellers Association International).