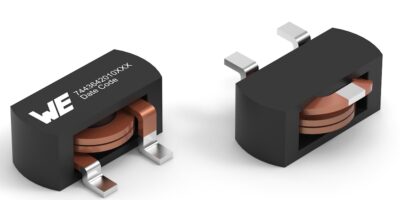 Improvements to the internal design of its 2010 sized high current inductors have resulted in “significantly better characteristics”, says Würth Elektronik. The WE-HCF-2010 high current inductor has inductance values up to 2 microH and saturation currents up to 25 per cent higher than comparable products in the market, says the company.

The magnetically shielded flat wire coil with MnZn core has a low resistance of 0.84 mOhm and low core losses. The recommended three-pin contacting ensures mechanical stability of the WE-HCF, which is designed for an operating temperature of -40 to +125 degrees C. Potential applications include point of log (PoL) regulators for FPGA, ASIC and GPU, high-efficiency DC/DC converters, high-current switching power supplies, forward converters, half-bridge and full-bridge converters, as well as battery chargers and solar inverters.

The WE-HCF 2010 is available immediately from stock with no minimum order quantity. Würth Elektronik will provide free samples to developers upon request.

Würth Elektronik eiSos Group is a manufacturer of electronic and electromechanical components for the electronics industry. The technology company is one of the largest European manufacturers of passive components and is active in 50 countries. Production sites in Europe, Asia and North America supply a growing number of customers worldwide.

The service orientation of the company is characterised by the availability of all catalogue components from stock without minimum order quantity, free samples and extensive support through technical sales staff and selection tools.

Würth Elektronik is part of the Würth Group, which specialises in assembly and fastening technology.